14/10/2011 (actualizada 14/11/2011)
On 14 November 2011 Gillian Bevan and Deka Walmsley will join the West End production of BILLY ELLIOT THE MUSICAL to play the roles of Mrs Wilkinson and Dad along with Ann Emery who returns to the cast to play Grandma. 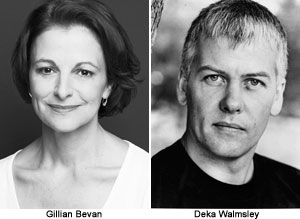 On 14 November 2011 Gillian Bevan (Mrs Wilkinson) and Deka Walmsley (Dad) will join the West End production of Billy Elliot the Musical along with Ann Emery who returns to the cast to play Grandma, the role she originated on stage at the Victoria Palace in 2005 and played until 2010.  They will be joined by new principal cast members Michael Peavoy (Tony), Sean Kearns (George) and Simon Ray Harvey (Mr. Braithwaite).

Also on the 14th November 12 year old Kaine Ward from Hertfordshire and 9 year old Macy Staisick from Darlington will join the new West End cast of BILLY ELLIOT THE MUSICAL.  Kaine will become the twenty-eighth boy to play the title role in the West End and the 62nd boy to play the role worldwide, including Jamie Bell who played Billy Elliot in the award-winning film. He is joined by Macy who plays Dance Teacher Mrs Wilkinson’s daughter, Debbie.

Gillian Bevan was last on stage in ROAD SHOW at the Menier Chocolate Factory, previously she has been seen in ‘Relatively Speaking’ at the Watermill Theatre, ‘Billy Liar’ at the West Yorkshire Playhouse, GRAND HOTEL at the Donmar Warehouse, ‘In the Midnight Hour’ at the Young Vic, ‘The Boys From Sycracuse’ at Regents Park Open Air Theatre, and she was in the original London cast of Stephen Sondheim’s FOLLIES at the Shaftesbury Theatre.  Her work for the Royal Shakespeare Company includes AS YOU LIKE IT andTHE WIZARD OF OZ.  On television she is best known for her roles as Gina Hope in BBC 1’s ‘Holby City’ and Claire Hunter in the award winning Channel 4 series ‘Teachers’, her other television credits include ‘The Innocents’, ‘Lewis’ and ‘Lost Empires’.

Deka Walmsley was last on stage in Lee Hall’s ‘The Pitmen Painters’ playing George Brown, a role he created in the original production at Live Theatre, Newcastle and subsequent runs at the National Theatre, UK tour and on Broadway.  His other theatre credits include ‘Cyrano De Bergerac’ at the Bristol Old Vic, ‘Enemies’ at the Almeida Theatre and ‘Playing with Fire’ at the National Theatre. His television credits include ‘EastEnders’, ‘Doctors’, ‘Dalziel and Pascoe’, ‘Inspector George Gently’ and ‘Holby City’.

Ann Emery has most recently been seen on stage in BETTY BLUE EYES at the Novello Theatre.  Her extensive theatre credits include ‘Hard Times’ at the Theatre Royal Haymarket, MARTIN GUERRE at the Prince Edward Theatre and CATS at the New London Theatre.  On television her credits include ‘Rentaghost’, ‘Julia Jekyll and Harriet Hyde’ and ‘Radio Roo’ all for the BBC, Emery has also made guest appearances in her late brother’s BBC hit comedy ‘The Dick Emery Show’.

Michael Peavoy will make his West End debut in the role of Billy Elliot’s brother Tony.  A 2010 RADA graduate Michael made his professional stage debut in Nicholas Hytner’s production of ‘Hamlet’ at the National Theatre.

The internationally award-winning show, which opened at the Victoria Palace Theatre in 2005, has been seen by over 7.5 million people worldwide, including 3.5 million in the West End.  Now in its seventh year in London, BILLY ELLIOT THE MUSICAL, has also been staged in Sydney, Melbourne, Chicago, Toronto and Seoul, South Korea. The show continues to perform at the Imperial Theatre on Broadway and on tour across North America and further international productions are planned.

Based on the Oscar nominated film, BILLY ELLIOT THE MUSICAL is an inspirational story of one boy’s dream to realise his ambitions against the odds.  Set in the North East of England against the background of the historic 1984/85 miners’ strike, Billy pursues his passion for dance in secret to avoid disapproval of his struggling family.

BILLY ELLIOT THE MUSICAL features music by Elton John, book and lyrics by Lee Hall, is directed by Stephen Daldry with choreography by Peter Darling. The production features scenic design by Ian MacNeil, the associate director is Julian Webber, costume design is by Nicky Gillibrand, lighting design by Rick Fisher and sound design by Paul Arditti. Musical supervision and orchestrations are by Martin Koch.